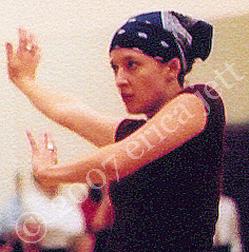 When Erica was asked at a very young age what she wanted to be when she grew up, she said "a Solid Gold dancer." By the age of three, Erica was enrolled in ballet, tap, baton, and gymnastics classes. Soon there after, Erica joined a gymnastics team and also continued baton with Billie's Rainbowettes. She was a competitive gymnast up until the age of 11 when she suffered a back injury. After recovery she did not return to gymnastics, but instead focused on the physicality of percussion and different forms of dance.

While in high school, she studied jazz dance and was asked to assist in teaching classes. She was also a member of her high school's Neon Dance Troupe, which performed completely under black light and was choreographed almost completely by the students in the Troupe. For a Chorus concert, she sang and danced "Straight Up" by Paula Abdul, which she learned the choreography of by watching the video.

In college, she studied tap once again, as well as some modern dance, but her passion remained with hip hop. Although she had been dancing in that style most of her life, and had danced in clubs from New York to San Francisco, in 2002 she started studying hip hop with WAYNE from the dance company Jusway International. A new company was soon born between Erica, WAYNE, and another dancer from the class. The three co-choreographed in an organic fashion with each of them offering multiple disciplines of dance, and their ages spanning three decades to add to the diverse mix. These factors resulted in a unique and new style of hip hop dance. They were chosen to perform at the annual Choreographer's Showcase in Albuquerque, but it unfortunately conflicted with Erica's filming schedule of 21 Grams in 2003. Soon thereafter, WAYNE moved back to L.A., and the company was no more. 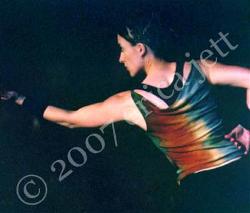 The video clips below are of an exhibition performance from the class in 2002. Erica is in the front row on the viewer's right side of WAYNE, who is wearing an orange shirt. Erica is the shortest one, and is wearing a blue bandana on her head. Video of "Busy Child," a solo choreographed and performed by Erica will be posted soon.